Specters are enemies in Death's Gambit.

Shades which sometimes suck the life out wretches.

They have a strange tongue that comes out of their chest and an immunity to most damage types while in the dark.

Specters are immune to physical and fire damage. Try lightning damage or energy weapons. You may also make them vulnerable by throwing a Sun Stone near them.

Specters also seem to have a debuff which causes you to face the wrong direction after some attacks. This can lead to mistakes while air dashing.

Specters have a few attacks

Tongue Lash: The specter does a simple low damage attack with its tongue

Vortex: The specter summons a vortex which will drag you in then after a short while it will explode dealing very high damage and knocking you back.

Spirit Skull: The specter throws a green skull at you dealing high damage and shocking you and leaving you open for other enemies to hit 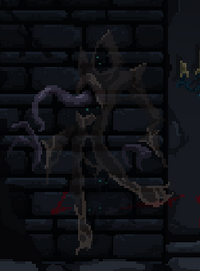